Once while attending a panel discussion on “church hurt,” I heard one panelist talk about her issue with the phrase “Church Hurt.” The speaker talked about The Church being a place of healing and restoration, therefore there is no such thing as church hurt. As I looked around the room, mine wasn’t the only face that showed concern and disappointment. We found ourselves in yet another church setting with someone else naming and misdiagnosing our collective pain.

That panelist’s take on things came after several people had reported multiple encounters with hurtful and damaging people and practices in religious settings. I doubt anyone there; not the ministers, church leaders, lay members, other panelist, or anyone in the audience would argue with the premise the speaker was attempting to relay. Yes, The Church is designed to bring hope to the hopeless. However, saying there was no such thing as church hurt could be viewed as dismissive at worst and minimizing at best.

The Church, the big “T” big “C” church, is a body of Christian Believers made up of people worldwide. Although Christian churches say they use the same Bible, what is read is all too often practiced in different ways. I grew up seeing the differences between the freedom and joy my father preached about and how he interacted with his family. By the time I was a teenager, I was well aware that the same people who spoke of sharing in the pain and joy of fellow Believers, were the same ones who turned a blind eye to the troubles my parents experienced in their marriage.

Let me be clear, as familiar as I am with church hurt, I continue to believe in The Church. I seek to strengthen my relationship with Christ and the Biblical principles upon which that relationship is founded, and help others do the same. No, The Church is not designed to condemn or cast anyone aside. Yet, local churches are guilty of relating to its members by manipulating Scripture to oppress and continue systems of abuse.

Mishandling Scripture is not only viewed as an offense to God, it also impacts our relationships with each other, God’s people. Because God’s Word has been looted of its intended purpose, many who come to a local church needing a band-aid, leave needing crutches. The adage, “Hurt people, hurt people,” is evident in any given local church. Whether the harm is preached from the pulpit or exerted in an auxiliary meeting, many leave weak and limping, questioning God’s willingness and ability to heal.

People who have never fully understood the love of a Savior are hurting and hurtful. They limp about, doing more damage than good because of an under-developed faith and unnurtured relationship with the Lover of their souls. Whether the issue is racism, sexism, ageism, or any other ism that creates chasms or cripples; it all comes back to lacking an ability to view everyone as creations of the same powerful and loving God.

Hurtful and oppressive practices will be greatly reduced, maybe even alleviated once we have an unbiased and accurate understanding of Genesis 1:27. Each of us is made in the image and likeness of the same God; we are Imago Dei. Once I fully accept that I am made in love, with love and to love, I am then able to celebrate that this is true for every person on the planet. It won’t matter if that person has self-awareness or not. Because I know it, I will adjust my actions and beliefs to reveal it to others. True self-love, a love built on the premise that the God of the Universe is madly in love with me, motivates me to both model and exercise that love toward others.

Having switched from mental health clinician to coach and consultant; Cherise Young is the founder of Oasis of Hope Coaching and Consulting. As a speaker and facilitator, Cherise offers space, tools, and support to repair, recover, and rebuild. To know more, visit: www.MyOasisofHopeConsulting.com View all posts by Cherise M. Young, MA

3 thoughts on “The Church and Church Hurt” 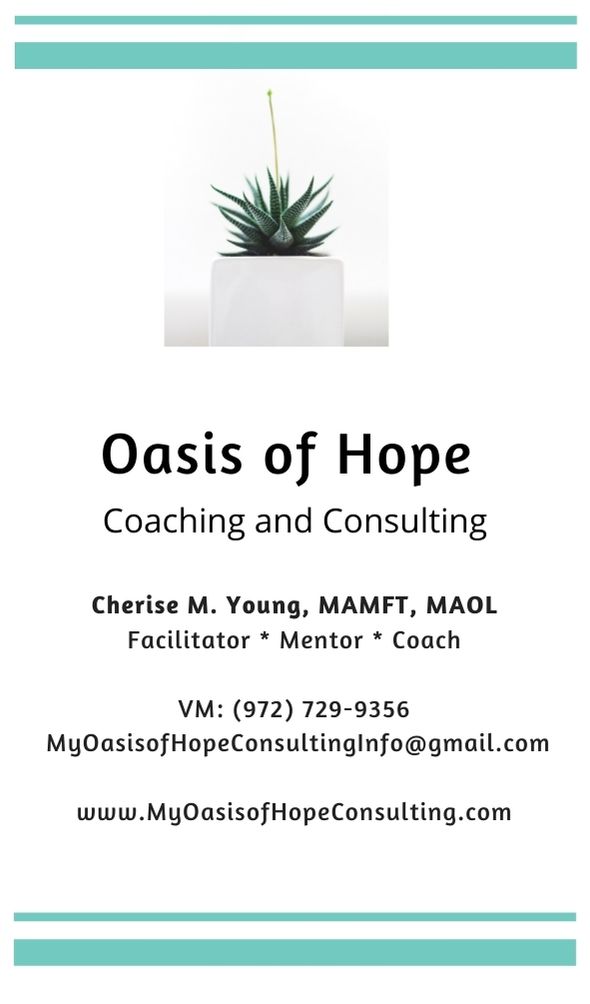